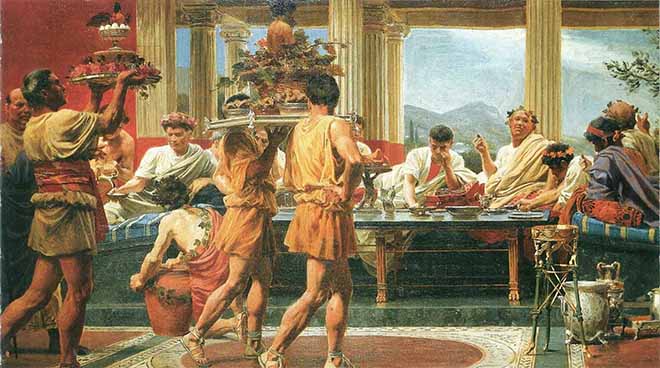 It's beginning to feel a lot (less) like Christmas

And so this is Christmas, and what have we done to it?

Relax, I'm not going to go all born-again and honk-if-you-love-Jesus on you, but, for Christ's sake, what's happened? It's become an annual festival of greed and excess, and bugger good will toward men, let's get pissed and have a fight. I accept that Christmas ceased to be a religious festival before I was born, but now it's far less godly than the Saturnalia it replaced. At least the Romans confined it to a single day of getting shit-faced and eating till they threw up. They even added a bit of good will by swapping places with their slaves and cooking the Christmas pud for them (though I bet no one ever dared say, 'This turkey's a bit dry, Master').

It's now officially recorded that Britain starts celebrating Christmas earlier than any other nation. Our main holiday starts somewhere around the end of October, and business doesn't really get going again until February. In the period between we spend so much that we need the remaining nine months to save up for the next one.

In my youth I used to love going out on Christmas Eve to enjoy the warmth and friendliness to be found in every overcrowded pub. To get home, we'd stick our thumbs out and enough cars would stop to form a taxi rank. At Christmas 2017, you'll almost certainly get punched, possibly stabbed and there's a better than even chance you'll be sexually assaulted by an unlicensed cab driver on the way home.

Maybe it's a good thing it's become non-PC to call it Christmas, though my reason for that has nothing to do with offending Muslims. Back in the days when I ran an agency, only one of my staff saw Christmas as a religious festival. He was a dedicated and devout Muslim, and he saw it as a commemoration of a great prophet. The 'Christians' he worked among saw it as a time to get pissed and eat too much.

I don't ask for us all to go to midnight mass and genuflect every time we sneeze, but can we somehow get back to spending a couple of days every year actually being nice to each other? And if it's going to be the same old season of excess, can we at least go back to making it a couple of days, instead of nearly three months?