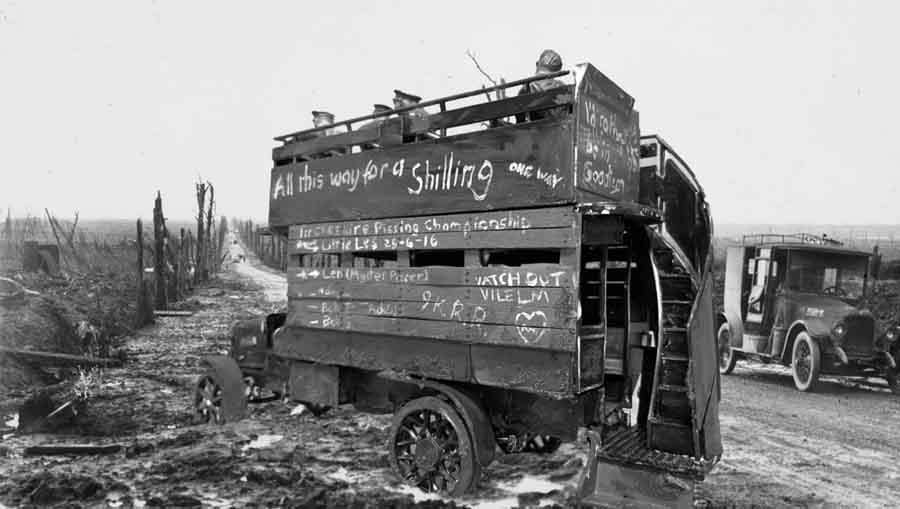 A Sense of Entitlement

A repeat visit to the Bovington Tank Museum (it's worth it) had me gazing for many minutes at a sprawling diorama of the tank assault on Cambrai. Always more suggestible than a hypnotised spaniel, I can away full of plans for a diorama of my own*. This would be more modest than the 4m² museum display but, at least in my brain, be equally impressive. I cast about for a suitable centrepiece and recalled the 1/32 scale Old Bill bus from Airfix that I'd built sometime in the early sixties. It could be built as either a London bus or a WW1 troop carrier. A search on ebay turned up trumps and I soon found myself in possession of a splendid piece of nostalgia. This one came without the choice of builds, but that was no problem as it was the troop carrier that interested me.

The kit came with cardboard press-outs to work as planking, liberally chalked with unconvincingly polite graffiti. While I'll accept that the 2nd Shropshires might want to plant their escutchion on their transport, I'm unconvinced that all of the scrawls would be equally genteel. I made new planking from coffee stirrers and added the official results of the 1st Cheshire Pissing Championship. As you'll no doubt no, it was won by Little Les, with an impressive reach of 2.3 metres. And yes, I know there should be an "H" in Wilelm, but I think this particular entry might have been added by the same bloke who sign-painted Deafender.

I was rather pleased with the slogan across the top deck. All this way for a shilling felt appropriate to the wit of the period, and carried a poignance that appealed to my sentimentality. Then I realised I had the title for my new collection. It was going to be called War Stories. I think this is better.

* In case you're too impressed by the realism of the picture, this isn't the diorama - I wish it was. It's just my Airfix model Photoshopped into a WW1 photograph. The diorama is still work in progress, of which I have quite a lot.