The Dawn of Tanks

I'm just back from a great day out with a couple of mates. While I knew of the Tank Museum at Bovington, I'd never been there.

Given my obsession with the weapons and execution of war, I can't understand how I've never visited this incredible place. The Great War hall, especially, is everything a war museum should be. It's informative, superbly laid out and heartbreakingly poignant. The trench section is brutally realistic, from the shapeless corpse crumpled at the foot of a trench ladder to the huddled squaddie crouched in a corner, head in hands; if you lean in close, you can hear him whimper.

I've recently read about Fray Bentos, a Mk IV tank that became stranded near the German lines in 1917. They fought off repeated attacks for almost three days before escaping. All but one were wounded and one was killed. They were to become the most decorated tank crew of the Great War. I saw the story again while at the Tank Museum - you can read it here. If you watched the Brad Pitt film, Fury, then here's the real thing. I'm now working on a dramatised version of the story for the new war collection.

I was particularly struck by a cutaway Mark 1 tank. This has dummies inside it; pressing corresponding buttons highlights a crew member and we hear their account of conditions inside the lurching steel box. The Mark 1 had no suspension, and seats were provided only for the driver and commander. The remaining six perched where they could, among bruising edges and obstructions. The engine was exposed, and the exhausts glowed red hot. Get thrown against them and the injuries would be hideous. 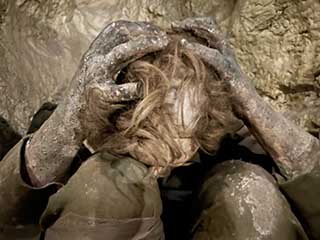 Those exhausts leaked toxic gas; headaches and worse symptoms of carbon monoxide poisoning were so commonplace as to be ignored. Temperatures inside frequently exceeded 50°. The noise made conversation impossible, and most commands were conveyed by banging the roof and giving hand signals. The armour plate could withstand small arms fire and potato-masher grenades, but provided no protection against artillery. Even rifle fire, though, could inflict injury. Bullets hit the armour with sufficient energy to melt the lead, which then splashed through cracks to spray molten metal inside. The repeated impact from machine-gun fire caused splinters to break free inside, firing lacerating fragments around the interior. Crews were issued with chain mail masks, but these were so uncomfortable in the airless sweatbox that they were used only under the most intense fire.

Yet again, I found myself humbled by the heroism of crews who endured this hell to rumble out, at no more than walking pace, into the concentrated fire of the enemy, especially given that poor reliability and ice-slick pitfalls meant that many would need to walk back.

For me, few things convey the terror of war so much as the brutish rhomboid bulk of these early tanks. Their silhouettes crowded childhood fever-dreams. The Shermans and Churchills of the second conflict were exciting, but these beasts were, absolutely literally, the stuff of nightmare.

All these years later, I finally understand why.