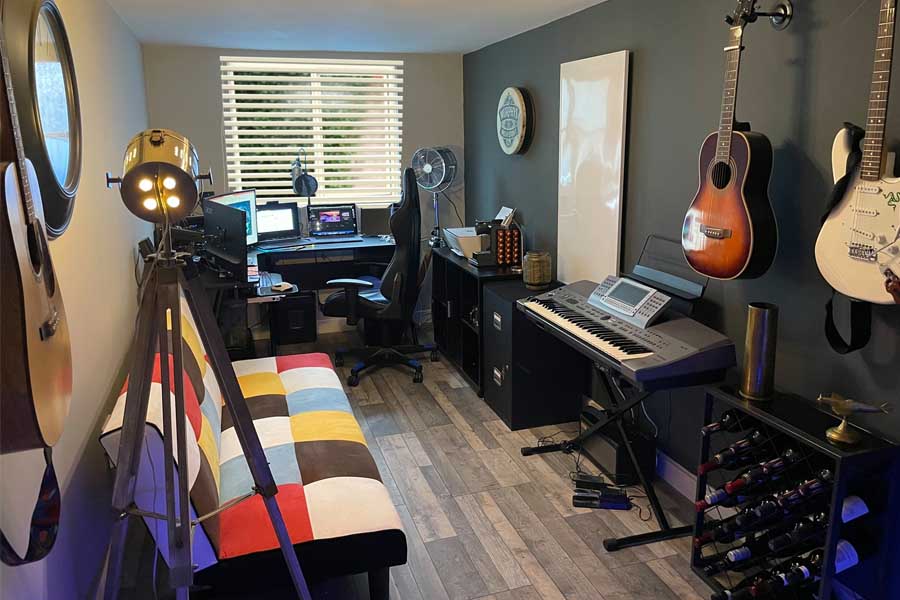 A Man Cave at Last

A Room without Much of a View

I began working from home in 1990, writing marketing copy on an Atari 520. My first PC followed a few months later, boasting a mighty 386SX processor and an unfeasibly large 45MB hard disk. It cost me just under two grand, but such jaw-dropping computer power had never before been packed into such a small spare bedroom. As business progressed, my office facilities expanded to a 6ft x 4ft shed at the bottom of the garden. Equipped with a radiator and a decent stereo, it saw the birth of what would become a successful multimedia business. I spent many happy hours among some of the largest spiders yet seen in the UK. We left each other alone and coexisted happily.

But I dreamt of empire. One day, I promised myself, I'd have premises and staff. I'd drive a prestige car, win awards and prove all of those who'd been tasked with teaching me wrong. Beware what you ask for...

By the mid-nineties I had premises, co-directors, staff and a car that warranted its discreet "turbo" badge. Before the millennium, despite the brand-new Jaguar, I came to wish I was back in my shed.

It took me until 2007 to get there. By then, the shed was gone and I was back in the spare bedroom. No staff, no premises and a Vauxhall Vectra on the drive. I'd never felt so happy. The road back to relative prosperity was long and not particularly straight but, even in the dark moments, I'd think back to those complicated days and be delighted that I now relied on no one but myself. The spare bedroom was pretty much as I'd left it twelve years before. It was already looking tatty even then, and the assortment of indispensible junk that had accumulated in there hadn't been kind to the walls or the carpet. My adoption of the space as an office had consisted of moving as much stuff as possible into the garage, then hiring and filling a skip to make space for desk, filing cabinet, computer, printer - and musical instruments. My wife has never understood why I need such numbers. The answer, of course, is simple: there wasn't room for as many as I really needed.

The years passed. The room got tattier and more cramped, and finally the time came to make a move. Today, I moved into what used to be the garage.It hasn't been much use as a garage for the last five years, since I converted the car port in front of it into a utility room. Yes, me. I built that utility room, with bricks and mortar and stuff, and it still hasn't fallen down. The garage was still "the garage" though. A bleak, damp, brick cavern with exposed rafters and all the detritus that had previously inhabited the spare bedroom. And spiders. If the arachnids that shared my shed were big, these things were straight from a 1950s sci-fi movie. They even moved jerkily. Every time I scaled the heaps to reach something buried over by the (broken) window, I armed myself with an AK-47 and prepared to aim at the antennae. The University of Wales submitted a proposal for funding a study of new life forms. One evening, I'm sure I heard David Attenborough's voice somewhere at the back.

But all that has gone. Two skips this time, a lot of cleaning and the extinction of at least one species, and here I am. I have my own space. It's mine, I tell you! All mine! The view isn't too inspiring. My snug new double-glazed window looks out on my toolshed, a galvanised metal monstrosity that inspired my next-door neighbour to build a ten-foot wall. The slope of my back garden means that ground level is less than a foot below the windowsill, but even this has advantages. I can watch the squirrels conceiving ever more devilish schemes to nick the birds' food. Better still, that low window means that they occasionally come and peer in at me, probably wondering why I'm not doing something useful. Like earning a living.

Oddly enough, though, I'm doing a lot more of just that. Even though the room's connected to the main house via the utility room, I feel I'm actually going to work in the mornings. I'm even beginning to write again. I just hope all this doesn't distract me from the room's true purpose.

I've got room for more guitars.