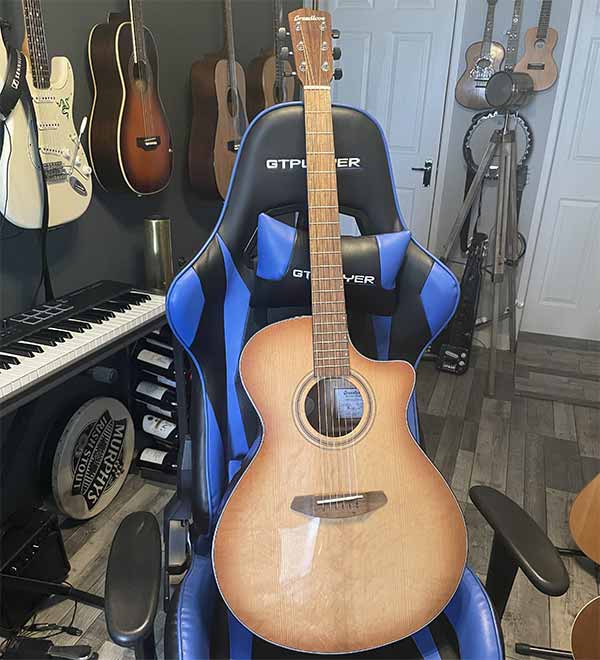 My knowledge of football ranks slightly behind my ability to calculate Planck's Constant, but even I recognise the number 7 shirts worn by fans of Ronaldo, Keegan or Beckham. As a mature, reasoned individual I am, of course, immune to such merchandising tricks. You'll never catch me splurging money on something just because it looks similar to an item associated with a celebrity.

Unless, of course, we're talking about Richard Thompson. I've expounded the genius of this virtuoso previously, and his guitar playing suggests that each of his fingers possesses its own brain. When playing electric, he usually rips ten colours of excreta out of a Stratocaster, but that could be said of many guitar heroes, so my ownership of a Strat can't be blamed on emulation of my idols*. But his acoustic performances are almost exclusively delivered on a Breedlove. These are less well-known.

They're made in Bend, Oregon to commendably high levels of sustainability. No clear-cut timber is used, and each tree is visited and certified before harvesting. The wood is torrefied to pre-condition it before manufacture. This matures the guitars so that they're effectively "played in" from new. In short, they've got a lot to recommend them. It's not just me being a fanboy**.

Monday night is jam night. It's when I meet up with a bunch of other dreadful old men and a small number of younger and far more pleasant women to ruin the peace of a pub in Stafford. My mate Kevin, who runs my local music shop turned up with a parlour-sized Breedlove rather than his usual well-worn Seagull.

Oh, this is good. This is really good. I need one.

Unsurprisingly, a couple of weeks later, as Kevin was watching me revel in the joys of his Breed, he artlessly mentioned. "I've got another Breedlove in if you're interested."

Bastard. He's done this to me before.

I dropped in to the shop a couple of days later and tried it. It's a deceptive guitar - from the front it's roughly the same size as Kevin's Concert that I'd ogled, but it's deeper and strutted differently. It sounds, and is, big. I couldn't afford it but, sod it, Richard Thompson plays one***.