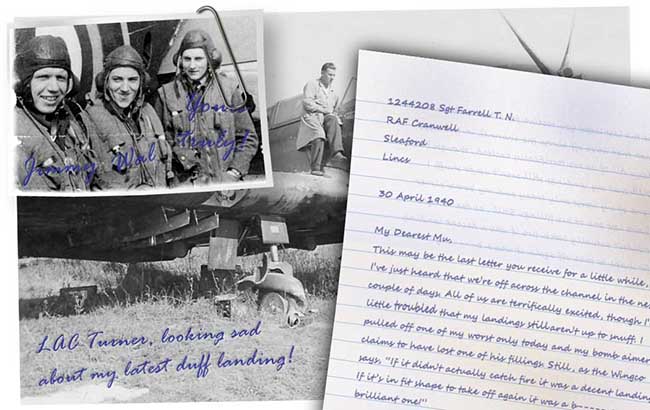 Jan Edwards is a talented author who's entrusted me with editing her latest novel, Winter Downs. It's a pretty damn' good crime novel set in Sussex in 1940, so editing it is no chore, though it's taking a lot longer than I'm sure she'd wish. Knowing my interest in the period, Jan's also done me the honour of inviting me to participate in her launch of the book in June. As well as a flattering invitation, it's a chance for me to showcase a few of my own forthcoming scribblings.

The event is to be themed around the Second World War, and between us we've come up with the idea of a series of letters exchanged between a young, newly-married couple, she at home coming to terms with the privations of the civilian war, he in France, facing the catharsis of fighting a better-equipped, more prepared enemy. Neither of us know what the other will write, so we'll genuinely be learning of life over there or back home through these written exchanges.

I wrote the first letter a few days ago, and just read "Dearest Mu's" reply with much the same eagerness that young Terry would have experienced on opening the envelope.

This may be the last letter you receive for a little while, as I’ve just heard that we’re off across the channel in the next couple of days. All of us are terrifically excited, though I’m a little troubled that my landings still aren’t up to snuff. I pulled off one of my worst only today and my bomb aimer claims to have lost one of his fillings. Still, as the Wingco says, “If it didn’t actually catch fire it was a decent landing. If it’s in fit shape to take off again it was a b------y brilliant one!”

We’re getting pretty settled in with the new kites – apart from said difficulties getting them down in one piece – and I must say they’re the absolute bee’s. That’s stripy bees, as in good, not profane bees as in not good at all. We have the same engine as the Spitfire and the Hurricane, so you can imagine how they go!

We’ve been sorted into permanent crews, so I now have my own air-gunner/wireless operator and bomb aimer. There’s Jimmy – he’s the AG/WOP – who’s a tall good-looking sort with a proper moustache, not the sorry little caterpillar I’ve worked so hard to cultivate. He’s a bit of a ladies’ man, as you might imagine, always with a different lass on his arm, but he’s a really good sort and we get on a treat.

The bomb-aimer, Walter, is a very different tin of sardines. He’s only about five foot four, which is just as well as it’s pretty cramped in his little tunnel in the bottom of the fuselage. He’s the funniest man in the squadron, so I’m lucky to have him. You’ll never be down when Wal’s around! All three of us are sergeants, so there’s no rank difference on the ground, but they both call me “Skipper” in the air, which feels a bit strange.

I’m enclosing £9 – 10s – 0 to use as you see fit, but if you can bank some of it towards the house fund then that will be very fine. If we can get a place of our own when I get back, then wouldn’t that be the thing? No disrespect to your Ma and Pa, of course, but I’m sure they’d appreciate having their front room back!

I can’t say when or where we’re going, for the simple reason that I don’t know, but you can write to me at this address anyway – the mail will always get through. And don’t worry about me – I know you do. France is going to be a holiday, I’m sure.