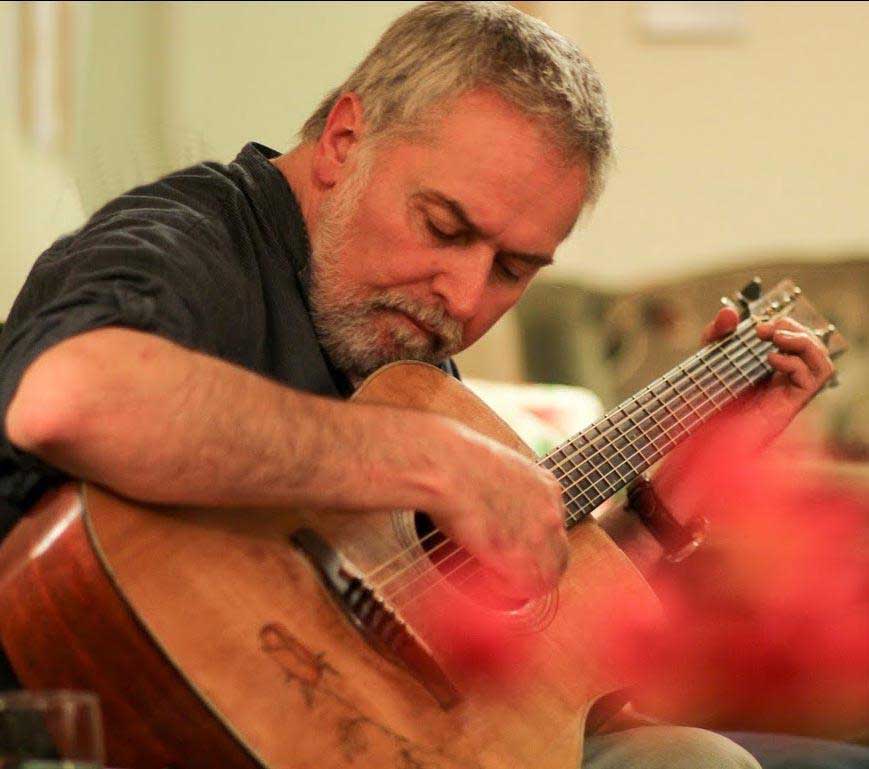 You get what you pay for - and sometimes more

I mentioned fitting more guitars into my new man-cave. Then, while moving years of randomness to its new home, I found this photie. What you see here is the Yamaha FG-180 I bought in 1969. It's not clear whether it captures me in the grip of deep emotion, or the moment when I drop my plectrum down the hole. Again.

These pieces of Japanes plywood had started to appear in folk clubs around a year before and they were uniformly dreadful. We used to swap boxes around off-stage, and these things were spreading like Covid. It wasn't hard to see why - thirty quid bought you something that looked very like a guitar. It even sounded like a guitar. A guitar that's been stuffed full of toilet paper and fitted with strings of solidified snot. Most decent guitars are built with a solid wood top, while the sides and back are usually laminated. Better ones are all-solid. Bridge and nut were made of bone in those days before modern synthetics. The FG180 was all laminated, glued together where the bits touched and fitted with plastic nut and bridge. The fingerbooard - usually rosewood or ebony, looked suspiciously as though the frets had just been hammered into the neck.

One night, we were doing the usual pass-the-box game when I found myself pecking away at something special. It sang; the bass was deep but clear and the treble bright without shrillness. This was great, what was it? Whaaat?! The guitar's owner saw me gazing in belief at the label.

"Good? It's bloody incredible. Every other one I've played has been dreadful."

"I know, but every now and then, they make a good one."

Birmingham folkies of sufficient age will remember Kay Westworth's in Cannon Street. I'd bought several guitars from them and they knew exactly what was coming when I said, "I've tried a few Yamaha FG-180s and-"

"-and they're nearly all bloody awful, but you've just tried a good one. Come with me."

The cellar was significantly larger than the shop above it. My host (I wish I could remember his name - lovely guy) took me to a room lined with pale blue boxes. "Try as many as you like, but do me a favour and put the duff ones back."

I can't remember how many I tried, but it was a lot. I was beginning to despair when I peeled the tissue paper from the instrument I'd still be playing more than fifty years later. It was pure magic, and it still is. I part-exchanged a John Pearse Aria (now highly collectible) and took the bus home in a state of high excitement. 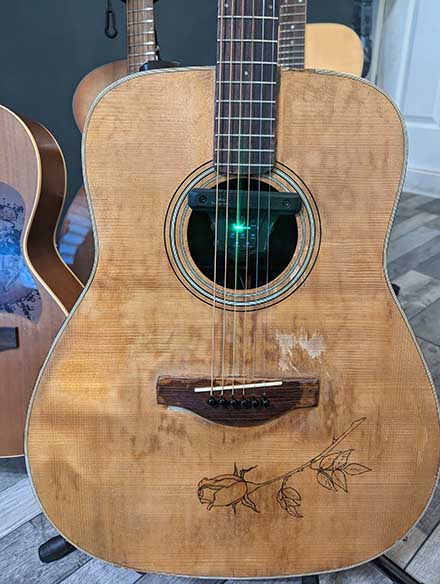 Someone told me that it was possible to improve the tone of a cheap guitar by sanding off the polyurethane laquer from the top and applying linseed oil. I tried it, but got bored with sandpaper and turned to my father's Black & Decker. A couple of years later, when I was marginally supplementing my income by selling paintings on wood panels, I attacked the poor instrument with Humbrol enamels. The resulting Japanese lady, beset unaccountably by a Chinese demon bursting from the soundhole against a background of Stonehenge, engendered more bafflement than admiration, but at least my performances were remembered. "Jem Shaw? Oh you mean the twat with the weird painting?"

Eventually, realising that the enamel paint might not be acoustically ideal, I attacked the old girl with a Surform. The paint came off, along with most of the top layer of plywood. Much of the edge purfling, which turned out to be poorly stuck-on tape, came off too. In trying to get into the corners around the bridge and fingerboard, I gouged out even more wood. There are now deep channels there that, for reasons I can't explain, still show paint. The rest of the guitar now showed grain that, for most of the face, went the wrong way. To disguise the carnage I drew on a rose in pen and ink; it's still visible today.

Through it all this wonderful old darling continues to play, and continues to sound fabulous. I've no idea how. She now sports a Kepma pickup, an incredible device that uses the guitar's back as its speaker, allowing live reverb, chorus and delay without an amplifier. I'd say it's given her a new lease of life, but that would be an injustice. This old girl is immortal.